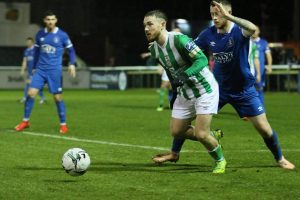 Wanderers made it two wins from two league games with this well-deserved win over Limerick FC. Wanderers started well. Joe Doyle had two chances within the opening three minutes. Firstly, he found himself clear with a one on one against Brady, but the keeper saved. He then blasted a chance over the visitor’s crossbar. Killian Cantwell saw yellow on 9 minutes for a poor challenge. Dylan McGlade was next to test the visitor’s keeper with a drive from outside the box on 18 minutes.

Brady denied Doyle on 21 minutes, pushing his shot around the post for a corner. Against the run of play Limerick had a chance to take the lead. An error from Sava gave possession away and Sean Heaney eventually conceded a penalty. Sava redeemed himself, diving to his left to save Conor Ellis’s spot kick.

Wanderers deservedly took the lead on 43 minutes. Dean O’Halloran’s cross from the right was headed home by Joe Doyle.

Within four minutes of the second half starting, captain Paul Keegan fired home from 25 yards into the top corner of the net. Brady saved well from a Doyle header on 71 minutes.

Luka Lovic’s first touch after been introduced as a substitute brought a fantastic save from Brady. Sean Heaney then crashed a header off the visitor’s crossbar in the final minute.