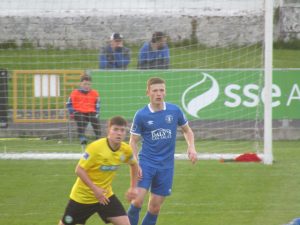 Once again, Wanderers paid the price for failing to take their chances when on top, particularly in the first half, when Limerick captain Shaun Kelly fired home an unstoppable effort seven minutes from time to win the game.

Wanderers made one change to the starting line up from the team that drew with Cabinteely last week. Luke Nolan started in place of the injured Philip Gannon.

Conor Ellis shot over after just four minutes for the home side. Wanderers started well, particularly down the left wing where Derek Daly was causing problems for the home side. On 21 minutes, Dean O’Halloran did well down the right hand and his low cross was met by Daly at the back post but he shot wide from four yards. On the half hour, Aaron Fitzgerald crossed from the left and Conor Ellis headed over from close range with Sava beaten. Three minutes before the break, Dylan McGlade set up O’Halloran, but he fired over when well placed. 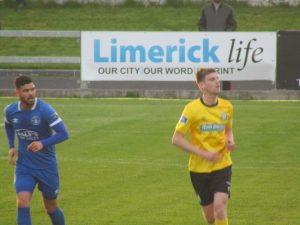 Three minutes after the break Sava produced a great save when tipping over a Darren Murphy shot. On 51 minutes, Jake Ellis’ cross from the left rebounded off the post. McGlade’s follow up was blocked at close range by Brady and O’Halloran tapped home the loose ball from close range. Bray’s joy was short lived as the goal was ruled out by a linesman’s flag. Dylan Barnett went close from a free kick on the hour when his shot went just over the bar.

Seven minutes from time, Shaun Kelly picked up the ball on the right wing and fired a long range shot to the roof of the net with Sava well beaten. Wanderers tried for an equaliser with their best effort coming from Dylan McGlade who fired over the bar two minutes from time.