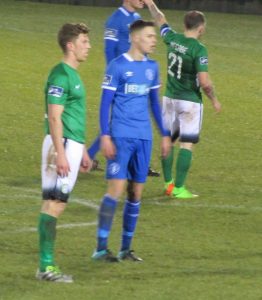 Both sides had suffered heavy defeats in their last outings so both defences were on edge.  The difficult playing surface did not help matters, a school’s rugby match was played at the venue a few days previous.
Neither keeper was tested greatly in the first half with Limerick having the two best chances. William Fitzgerald set up Daniel Kearns, who fired across goal, which the Bray defence eventually cleared.  Aaron Dillon easily saved from Eoin Wearen, after good build-up from Fitzgerald and Connor Ellis. Wanderers forced a couple of corners and free kicks late in the half but failed to test Brendan Clarke.
The game improved in the second half. Darren Dennehy headed just wide moments into the second half. Aaron Greene then had the best chance of the game. He outpaced the Limerick defence but shot straight at Clarke, McCabe eventually blazing over.
Limerick struck for the vital winner after 81 minutes. Shane Tracy crossed from the left and substitute Danny Morrissey dived to head home at the back post. 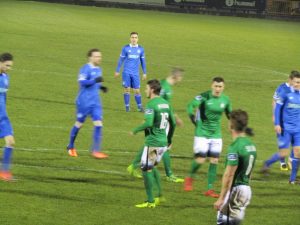