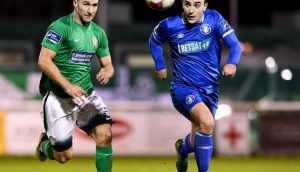 Wanderers made three changes to the starting team that were defeated by Waterford FC last week. Mark O’Connor replaced the injured Evan Moran in goal. Jamie Crilly came in for his first start in place of Darragh Gibbons while Jake Ellis started in place of Ger Pender up front.

Limerick FC extended their unbeaten run against Bray Wanderers to eight games having now won six and drawn two of the last eight league meetings between the sides since their last defeat to Wanderers in July 2015.

Limerick took the lead on 18 minutes. Shane Duggan got in on the left of the area and squared for Barry Maguire who tapped home from close range.

Wanderers had a chance on 35 minutes, but Jake Kelly fired straight at Holland. Kelly was injured in shooting and replaced by Ger Pender.

Wanderers gifted Limerick a second on 43 minutes. O’Sullivan’s cross from the right was only headed into the path of Conor Ellis by Kenna and he duly fired home.

Wanderers never really threaten the Limerick goal in the second half. This was Wanderers fourth defeat in the league this season to Limerick FC.