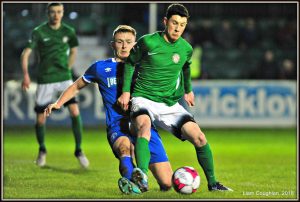 Wanderers made one change to the starting eleven from the team that were defeated by Waterford FC the week previous. Jake Kelly joins a long injury list and was replaced in the starting team by Daniel Kelly

At the end of the game Wanderers will be wondering how they failed to score in this game having missed a penalty, hit the crossbar twice and missed some good chances.

Wanderers were awarded a penalty on 40 minutes when Cory Galvin was brought down in the area by Billy Dennehy. Gary McCabe blasted the spot kick high and wide of the goal. On the stroke of half time a Kevin Lynch free kick grazed the top of Clarke’s crossbar and went over.

Danny Morrissey had a great chance for the visitors on the stroke of half time but he put his effort over the top from a Billy Dennehy free kick.

Limerick took the lead on 50 minutes. Fitzgerald’s throw in fell to Shane Duggan on the edge of the area and he fired low into the bottom corner past Aaron Dillon.

Wanderers had shouts for another penalty when Ronan Coughlan seemded to be brought down in the area but referee Paul McLaughlin waved play on.

Kevin Lynch hit the bar in the closing minutes following a Gary McCabe corner on the left. The result leaves Wanderers eight points adrift at the foot of the table and an uphill fight to avoid relegation.

SJ.B Academy week-end round up 29.04.18Team news ahead of Limerick clash