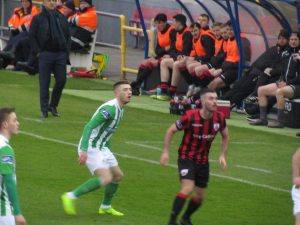 Hugh Douglas and Richie Purdy returned to the starting line up in place of the injured duo of Joe Doyle and Philip Gannon.

The home side took the lead after eight minutes. Anto Breslin’s corner from the right was headed home by Michael McDonnell who outjumped the Bray defence. Sean Heaney blasted over the Longford bar following a Dylan McGlade corner on24 minutes.

Sava saved well from Evans on the half hour mark. Wanderers found it difficult to get going and fell further behind on 34 minutes. Lee Steacy picked out Aodh Dervin and he drove on before passing to Peter Hopkins who rounded Sava and slotted home. Wanderers first real chance of the game fell to Killian Cantwell just before the break but his shot went just wide of Steacy’s post. 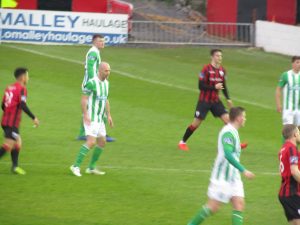 Wanderers improved slightly in the second half with more possession but never threatened Steacy in the Longford goal. On 78 minutes Sean Brennan fed Verdon on the edge of the Bray area and his shot forced Sava into a save.

Academy teams week end round up 14.04.2019Dean O’Halloran is Player of the month