Super sub Hugh Douglas came off the substitutes bench two minutes from time to turn a likely defeat into a victory for Wanderers.

Wanderers made two changes to their starting team from last week’s defeat at home to Shelbourne. Luke Nolan and Dylan McGlade started in place of Hugh Douglas and Richie Purdy. Wanderers started well and took the lead after five minutes. Joe Doyle picked up a loose ball and rounded Steacy before turning and crossing for the inrushing Derek Daly who headed past Steacy.

Longford responded well and went close through Dean Byrne. Byrne then went on a run down the left before beating Sava at his near post with a low drive just past the half hour mark. Longford enjoyed plenty of possession, but Wanderers created the best chances. Phillip Gannon blasted a shot over the Longford bar before Dylan McGlade forced a good save from ex-Wanderer Steacy. Derek Daly then got in on the left but was forced wide by Stacey. Daly turned and crossed to Dean O’Halloran who headed off the crossbar before Luke Nolan blazed the loose ball over the bar.

Sean Heaney came to Wanderers rescue at the start of the second half with a last-ditch tackle to deny Jamie Doyle after Paul Keegan was dispossessed of the ball. Substitutes Richie Purdy and Jake Ellis impressed as Wanderers improved in the closing stages. Purdy fired a shot just wide of Steacy’s goal. Five minutes from time, Luke Nolan’s attempted header back to Sava, from a long kick from Steacy, went over the advancing keeper and into the Wanderers net to give Longford the lead, 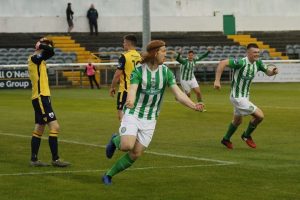 Two minutes from time, Paul Keegan’s corner on the left was flicked on by Dean O’Halloran at the front post and the unmarked Killian Cantwell scored from close range at the back post for his first goal for the club. Two minutes into stoppage time, Jake Ellis forced a corner on the left. Keegan’s corner was headed powerfully to the net by Douglas for a dramatic winner for the Seagulls.