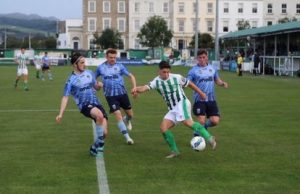 Wanderers took the lead on the quarter hour when Darragh Lynch went on a mazy run past two UCD defenders, before firing low past Healy for his first goal for the senior team. This was Wanderers 100th goal in all competitions against UCD.

UCD responded well with plenty of possession but Brian Maher stood firm in the Wanderers goal.

Lynch found himself in possession on the left after a through ball from Watson but the UCD defence crowed him out before he could get a clear shot on goal .Brian Gallagher went close for the Students on 57 minutes, but his effort went just wide.

Callum Thompson broke down the right in the 72nd minute and his superb cross was headed home powerfully by Lynch from close range.