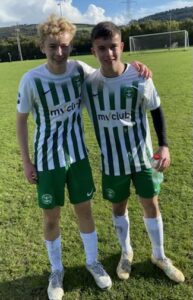 Max Mason was the four-goal hero as Bray ended their U17 season on a high.
The striker netted four times in the opening period at Ballycorus last Saturday afternoon as the Seasiders did an U17 EA Sports Tier 2 Phase 2 National Underage League double over Kerry.
Wanderers had won 4-0 at Mounthawk Park last July. Mason had opened the scoring back then. But a 12-minute hat-trick by the attacker saw the hosts blow the visitors side away.
Eager to end their 2022 campaign in style, the Green and Whites started brightly.
and had numerous chances in the opening stages.
They hit the front in the tenth minute as Mason applied the finishing touch.
He then doubled that advantage just two minutes later as the Kerry defence could not cope with the in-form forward.
He then completed his treble by the 21st minute to make it 3-0, getting through the away rear-guard yet again to bury the ball.
Kerry pulled one back in the 44th minute through Andrew Kerins.
But having already taken centre stage, Mason regained the spotlight seconds later to make it 4-1 at the break.
With a couple of substitutions and positional changes at half time, Kerry were more dangerous although the Wicklow defended really well.
The away outfit reduced the deficit to 4-2 in the 55th minute with Kerins on the score-sheet again.
A different complexion was then put on the game when Sean Treyvaud made it 4-3 in the 56th minute.
In an electric second half, Bray finally sealed the win in the 91st minute.
Oisin O’Halloran made a fine save. But the rebound came out to substitute Harry Sherlock who lashed his first goal of the season to the net.
The result leaves Bray sixth in the eight-team section.
With Galway United defeating Sligo Rovers 5-1 on Sunday at Eamonn Deacy Park, that result means Wanderers will finish in that position if Kerry do not beat Drogheda United on Sunday October 23 at Head in the Game Park. Kerry must also overturn a -8 goal deficit.