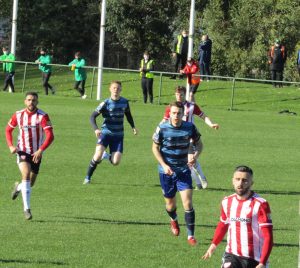 Ryan Graydon fired across the Derry goal from a tight angle after Brandon Kavanagh had played him down the right wing on the quarter hour. Two minutes later, Darren Craven’s shot was deflected away by a Derry defender for a corner.

Daniel Lafferty’s cross from the left was headed wide at the back post by Parkhouse on 23 minutes. Three minutes later, Lafferty’s shot was saved by Clarke who tipped the ball over the bar. The resulting corner was headed away to Marc Walsh on the edge of the area and he shot straight at Clarke.

Just past the half hour, Brandon Kavanagh fired a free kick from the right just past the post. A minute later, Kavanagh fired another free kick from a similar area straight at Gartside. Luka Lovic, who operated at centre half, played a superb ball down the right wing for Kavanagh and he turned in and fired just over on 39 minutes. Just before the break Walsh fired over at the back post for Derry after the ball broke to him.

Joe Thompson fired just wide for Derry on 53 minutes from just outside the area. Ryan Graydon fired across the goal after Shaw had headed on a Barnett cross to him. Both sides made full use of the subs bench in the second half.