Bray Wanderers advance to the First division play off final against UCD after Brandon Kavanagh’s wonderful strike settled this thigh play off semi-final.

Bray made two changes to the team that faced Galway the previous Wednesday in the first leg. Dylan Barnett and Darren craven returned to star tin place of Daniel jones and Gary Shaw.

Galway had an early chance after just four minutes, but David Hurley blazed over at the back post from a Conor O’Keeffe cross. Brian Maher saved from O’Keeffe as the home side pressed for an opener. Wanderers were under pressure from a succession of corners with Maher forced to tip over one from a Conor McCormack header. 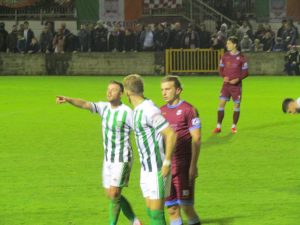 A good Wanderers move lead to the goal. Richie O’Farrell brought the ball forward and fed Darren Craven on the edge of the area. Craven held up the ball and laid it off to Kavanagh who controlled it before unleashing a powerful left foot shot that sailed into the top left corner giving Kearns no chance.

Moments later, Conor Clifford fired just over the bar. Galway responded and Maher produced an excellent save from Rowe, turning his shot around the post. From the resulting corner Waweru hit the crossbar from a goal mouth scramble.

Wanderers were forced to defend for most of the second half. The closest Galway came was five minutes from time when Alex Murphy crossed from the left but Ruairi Keating was unable to direct his header on target.