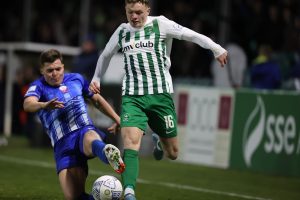 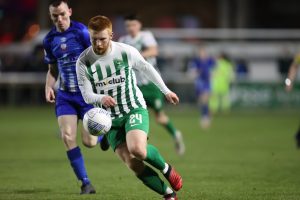 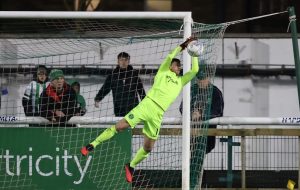 Bray end the first round of the SSE Airtricity League First Division fixtures with another draw as a solid defensive showing means the Wanderers have conceded just twice in the last five games.

A promising stat although the fact the Seagulls have only found the net four times in this period is of equal concern.

With the setting sun blinding those facing the main stand, thankfully the first ten minutes at the Carlisle Grounds on Friday passed without incident as both teams settled into the game.

Bray made three changes from last week’s draw with Keith Dalton, Kieran Marty Waters and Darragh Levingston came into the starting eleven while Dean Zambra took over the captain’s armband from an injured Hugh Douglas. 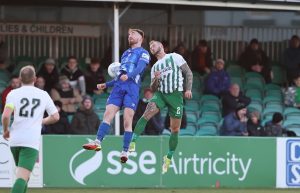 The match followed a familiar pattern while the Wanderers appeared more comfortable in possession, often stringing long passages of play together they lacked the cutting edge to challenge Jack Brady in the Treaty goal. Stephen McGuiness enjoyed a similarly quiet night having little to do but trying to get attacks started from the back.

The half time break saw Darragh Lynch replace Waters and the striker gave new impetus to the Wanderers’ attack.

It was Treaty who had the first true chance of the half though. Dean George’s ball from the left wing found Enda Curran’s head but the striker couldn’t keep the ball under the crossbar.

Much like the first half there was little between the sides in the second. Bray’s best chances came late on in the half with Rob Manley and Darragh Lynch both spurning opportunities to break the deadlock.

Manley’s effort came first on 78 minutes when he broke through the defence but Brady got a hand to his shot across goal to set up a corner, which ultimately came to nothing.

Three minutes later, Darragh Lynch had his opportunity when he similarly broke thorough towards the left-hand side of the box. Unlike Manley he went to the keeper’s near side but could only strike the side netting.

Treaty had the last of the action with a late Marc Ludden free kick not troubling McGuinness.

Bray extended their unbeaten run to five matches but will be disappointed to have only claimed three points from the last three outings.

The first round of fixtures has come to a close with the Wanderers battling it out for a play-off spot while Cork and Galway set the pace at the top of the table.

There is a busy Easter weekend ahead for the squad as they face Cork City at Turners Cross on Friday while Longford will then come to the seaside on Easter Monday for a 3.30pm kick-off.

Mint Plus man of the match: Dean Zambra.