Andrew Quinn netted an unlikely equaliser four minutes into added on time at the end of the game as Bray Wanderers produced a dramatic comeback from two goals down in the final ten minutes to earn a draw in a game that Cork controlled for the most.

Bray were unchanged from the starting team from that defeated Cobh Ramblers last week.

Cork took the lead after just five minutes. Wanderers failed to clear from a Dylan McGlade free kick and Cian Murphy poked home from close range after been set up by O’Brien -Whitmarsh. Conor Clifford drove a long-range effort just wide as Wanderers looked for an immediate response.

Brian Maher produced a great save on 12 minutes as O’Brien-Whitmarsh took advantage of a mistake from Clifford and raced through on goal, but Maher stood strong to save. Ex-Wanderer McGlade’s cross from the right on 13 minutes was just missed by Murphy in front of the Bray goal.

Darren Craven forced McNulty into a save and moments later he played in Barnett on the left who forced McNulty into another save from a tight angle. Brandon Kavanagh fired narrowly wide on 25 minutes after Clifford’s free kick was blocked by the wall and broke to him on the edge of the area. Maher produced a brilliant save on the stroke of half time, tipping over McGlade’s free kick. 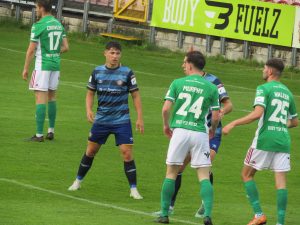 Kavanagh forced McNulty into punching away his shot in the opening minute of the second half. McGlade’s shot on goal was deflected out for a corner by a last-ditch block from Mark Byrne. On 54 minutes. A minute later, Cork doubled their lead when Murphy headed home after Coleman turned the ball back into the area.

Wanderers made a double substitution on the hour mark and improved considerably after that when new signings Daniel Jones and Sam Verdon were introduced.

Wanderers pulled a goal back six minutes from time when Craven tuned on a loose ball in the box after Cork failed to clear and scored from a tight angle. Deep into stoppage time, Brian Maher stopped a Cork attack just inside the Bray half and the ball was eventually pumped into the Cork box. McNulty punched the ball away only as far as Andrew Quinn on the edge of the area. Quinn’s shot through a crowed area found the corner of the Cork net to salvage a dramatic point for Wanderers in a game that Cork should have seen out.