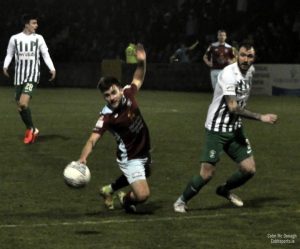 A moment of individual magic provided the spark for a Wanderers victory on a night when Cobh will probably feel aggrieved to see all three SSE Airtricity League points slip away.

There were strange scenes before the scheduled 7.45pm kick off at St. Colman’s Park on Friday evening as both squads warmed up in increasing darkness.

The lack of floodlights was not a nod to sustainability and reducing energy usage, but rather the result of an ESB outage in the neighbourhood.

With both clubs celebrating their centenary year, some in attendance wished that an old-fashioned afternoon kick off had been arranged so fans could have enjoyed the Bank Holiday sunshine.

A nervous wait ensued to see whether the trip to the South coast would be in vain but thankfully the great work of the ESB crew saw power restored and kick-off rescheduled for 8.15pm. 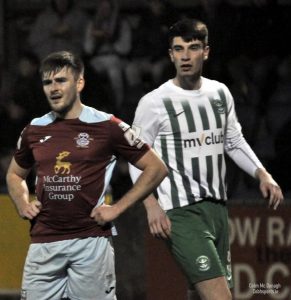 The Wanderers emerged for the second warm-up with one change to the starting eleven as Vilius Labutis replaced Conor Clifford who left the field injured last Monday night in Longford.

Cobh started to brighter of the two sides, no doubt spurred on by the 1,240 in attendance.

The first moment of danger came on three minutes when Stephen McGuinness got down smartly to smother a Ben O’Riordan cross. Just four minutes later, there were loud calls for a penalty which referee Eoghan O’Shea was quick to wave away.

There were a flurry of Ramblers’ chances on the half hour mark with Benoin O’Brien Whitmarsh twice shooting wide. The Cork side’s best chance of the half came after 32 minutes when left winger Conor Drinan broke clear but was denied by a spectacular outstretched hand from McGuinness.

The second half followed a familiar pattern with Cobh in the ascendency but unable to find a breakthrough. Their best chance came from a corner just after the hour mark when Abbot’s corner was met by the towering Mbayo only to be denied by McGuinness palm, and the foot of the post, before he could gather the ball fully.

The Bray keeper was quick to launch the counter sending Paul Fox racing down the right wing. His ball across the box found Kurtis Byrne who was denied at close range by Andrew O’Donoghue.

The game turned on 80 minutes through a moment of true class from Darragh Lynch. Lynch, who missed all of last season through injury, used his first touch brilliantly to turn his marker and surge to just outside the box before he unleashed a right-footed effort into the top corner.

Lynch did almost grab a second when he was once again found by Jack Hudson but this time O’Donoghue could get a hand on the ball to set up a Bray corner.

Cobh pushed to get back in the game but ultimately fell short of challenging McGuinness’ goal.

The referee’s whistle capped a significant week for Pat Devlin’s side as they collected six points from two tricky away ties and just like that find themselves in the play-off positions, albeit with a lot of football left to play.

A tricky home tie against Wexford is in store next week with the Slaneysiders coming up the N11 looking to continue their own strong start to the season.