Cork City maintained their record breaking start to the season with their 11th league win in a row to complete a clean sweep of victories from the first set of fixtures.

City started well and Peter Cherrie was forced into a save as early as the third minute, tipping away a free from Kevin O’Connor. After eleven minutes, Karl Sheppard’s shot beat Cherrie and struck the post with the rebound coming off Cherrie for a corner.

From the resultant corner, Derek Foran was harshly penalised for holding and referee McLaughlin pointed to the spot. Sean Maguire sent Cherrie the wrong way from the penalty.

Cherrie made a number of saves to keep Wanderers in the game in the first period.

Bray upped their game in the second half. John Sullivan’s flick on from McCabe’s corner was headed off the line by O’Connor after 51 minutes and Foran headed straight at McNulty from McCabe’s free kick. 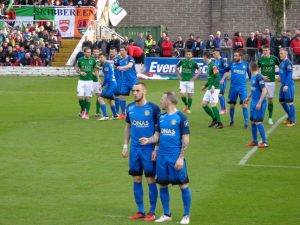 McCabe then fired over from a free kick just after the hour. On 68 minutes, Sheppard cut inside Jason Marks, but his goalbound shot was deflected over the bar by Tim Clancy.

Ryan Brennan’s pass found Connolly clear on the left on 73 minutes but, with the City defence closing he shot high and wide.

Five minutes from time Wanderers were caught on a counter attack. McCormack released Maguire with a ball over the top. Clancy clipped the striker’s heels as he was about to shoot and received a yellow card. The resulting free kick was deflected for a corner. From the corner, Cherrie saved brilliantly from Dunleavy’s header, tipping over the bar. Dunleavy made no mistake second time as he headed powerfully past Cherrie.

One minute into stoppage time Derek Foran headed in at the back post from a corner. Wanderers put some pressure on in the final two minutes of added time but were unable to test McNulty 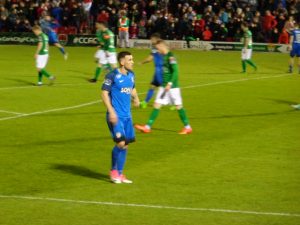 Under 17s draw with WaterfordTeam news ahead of trip to Cork