Dundalk moved back to the top of the premier division table with this win over Wanderers. Goalkeeper Evan Moran suffered an injury in the warm up and was replaced by 16-year-old Enda Minogue who made his first team debut.

Minogue made a brilliant save after just five minutes turning a Pat Hoban shot around the post. The visitors took the lead on 17 minutes. Jamie McGrath’s cross from the right was met by Hoban who looped a header over Minogue for his 23rd goal of the campaign. On 26 minutes, the Lilywhites doubled their lead as Robbie Benson’s corner was met by former Seagulls under21 player Brian Gartland who headed it down for Robbie Benson to apply the finishing touch from close-range. 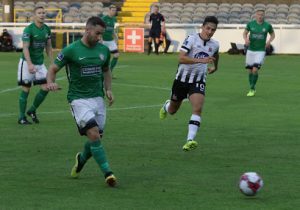 Wanderers best opportunities in the first half both fell to Sean Harding who drove a free kick just over the bar on 22 minutes and then he shot narrowly wide. Wanderers put in a spirted second half and pulled a goal back on 47 minutes. Ex-Wanderer Chris Shields gifted the ball to Jake Kelly who fired past Rogers.

On 75 minutes Dundalk sealed their win. Patrick Hoban looked well off side when he picked up the ball on the left wing. His cross was duly tucked home at the back post by Dylan Connolly. Sean Heaney and Kevin Lynch both received yellow cards in the aftermath after protesting against the goal. 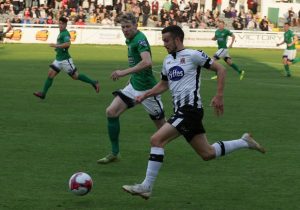