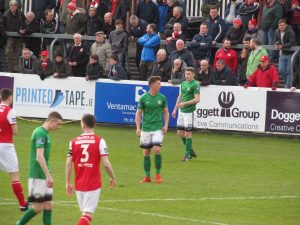 Bray Wanderers equalled their club records of nine successive defeats in all competitions and also eight successive league defeats with this latest heavy defeat away to St. Patrick’s Athletic.

Wanderers made one change to the starting line out from the team which was defeated by Cork City the previous week. Paul O’Conor came in to replace Jake Kelly. 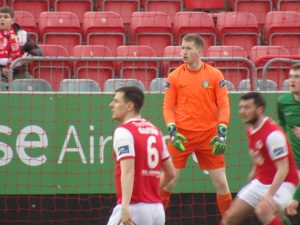 header by Ryan Brennan. Kevin Toner was left completely unmarked in the box on 37 minutes and he duly headed home the second.

Dean Clarke was brought down inside the area on 41 minutes by Conor Kenna who duly received a yellow card. Conan Byrne converted the resultant penalty.

Jake Keegan seemed to be in an offside position when he latched onto a through ball to powerfully finish to the roof of the Bray net on 58 minutes. On 62 minutes, Dean Clarke was clean through and he fired past Aaron Dillon to make it five.