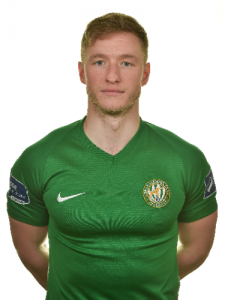 Paul started his League of Ireland career with UCD in 2010. In November 2012, he signed for Drogheda United and was a runner up in three cups in 2013. Drogheda were runners up to Shamrock Rovers in the EA Sports Cup and Setanta Cup and were defeated by Sligo Rovers in the 2013 FAI Cup Final, in which Paul scored in the 3-2 defeat. In November 2013, he signed for Sligo Rovers and played in three of Sligo’s four Europa League qualifiers in 2014.

Paul won the Setanta cup, along with current Bray team mate Aaron Greene, in 2014. He scored the winner in the final when Sligo defeated Dundalk 1-0 at the Tallaght Stadium.

He moved to Limerick FC in 2015. Limerick were relegated after a relegation play-off defeat to Finn Harps in 2015. The following season Paul he won the First Division title as Limerick ran away with the title. He was a runner up in the EA Sports Cup final as Limerick were defeat by St Patrick’s Athletic in the final.

Paul continued with Limerick for the early stages of the 2017 season but he moved to St. Patrick’s Athletic in July 2017.

He joined Bray Wanderers in January 2018.