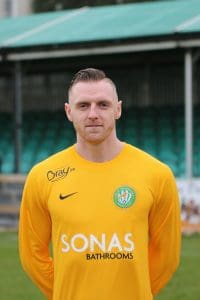 Peter started his career as an 18 year old at Airdrie United in 2002. He made just one senior appearance in two years at the club before a short spell at Junior side Kilsyth Rangers brought him to the attention of Ayr United. Peter made six appearances at Ayr before leaving at the end of the 2004/05 season. Joined Clyde at the start of 2005/06 and spent three years there before being released in June of 2009. Signed for Dundalk in July 2008. In 2010 he was voted Dundalk’s Player of the Year. In the 2014 season he started all thirty-three league games As Dundalk won the premier division title. In January 2015 he joined Cliftonville. Peter then moved back to the League of Ireland by signing with Bray Wanderers in July of 2015. Supporters club Plyer of the month for July 2015, April 2016 and July 2016.