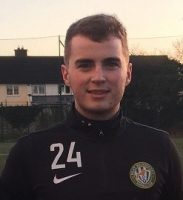 Ryan is a defender who joined Shelbourne U19s from St Kevin’s Boys in July 2013. He made his senior debut in an EA Cup tie against Bray Wanderers in March 2014.
Ryan re-signed for Shelbourne for the 2015 season and went on to make 21 league appearances for the club as they missed out on the play-offs. In 2016 he made a further 13 league appearances for the Reds but he left Tolka Park at the end of that season and had a brief spell with LSL side St Mochtas in January 2017.
Ryan moved to Bray Wanderers in February 2017