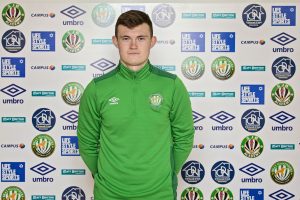 Sean joined Shamrock Rovers’ U19 squad for the 2013/14 season from St. Kevin’s Boys. He made his senior debut for Rovers against Dundalk in a Leinster Senior Cup tie and he made two more LSC starts that year including in the final against St Pats which Rovers won 1-0.

In 2014 he played for Shamrock Rovers B in the First Division. He went on to make 16 league appearances for the B team and also played in 4 league games for the First team, scoring in a 2-1 win over Bray Wanderers. Sean joined First Division side Shelbourne on loan for the 2015 season.

In 2016, Sean returned to Rovers where he appeared in both of the club’s Europa League matches against Finnish side, RoPS. He then went on loan to Waterford FC in July 2017 until the end of the season.

He signed for Bray Wanderers in January 2018.