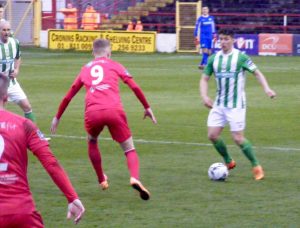 Shelbourne edged this game with the aid of a soft penalty awarded to them in the 33th minute when Sean Heaney’s shoulder challenge on James English was deemed a foul by referee Marc Lynch.

Paul Keegan returned to the starting team after missing last weeks home win over Cobh with a facial injury. Shelbourne lined up with four ex-Wanderers players and two former Wanderers under 19 players in their starting line up along with Darragh Noone on the subs bench,

Shelbourne were on top in the opening half at a rain soaked Tolka Park. Former Wanderer under 19 player Oscar Brennan drove a shot over the bray crossbar on 16 minutes following a Shelbourne corner on the left. Kieran Kilduff forced Sava into a save on 20 minutes. 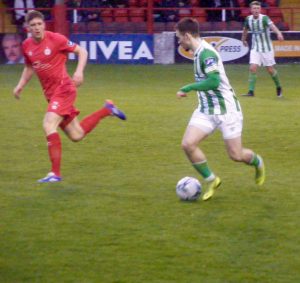 Bray began to come into the game more and Derek Daly drove a shot wide after a good move just before the half hour mark. Sava then produced a great save to deny James English in the 31st minute. Two minutes later, referee Marc Lynch awarded a spot kick after Heaney challenged English near the end line away from the goal. Lorcan Fitzgerald converted from the spot kick. Derek Daly fired a shot over the Shels bar on 36 minutes as wanderers tried to respond.

Wanderers started the second half on top and forced three successive corners within the opening few minutes. On the hour mark, Dylan McGlade went on a good run but was forced away from goal after getting into a good position. Oscar Brennan received a yellow card for a foul on McGlade on 71 minutes. From the resulting free kick McGlade’s shot rebounded off the crossbar. Richard Purdy had two late chances on goal as Wanderers tried in vain for an equaliser. 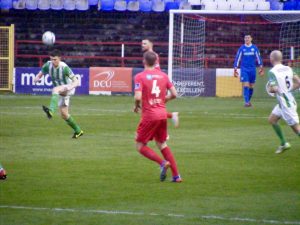