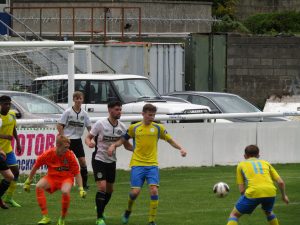 A good-sized crowd turned up to witness a very entertaining game on a bank holiday afternoon. Cian Walsh forced McGing into a good save after just seven minutes. Finn Harps took the lead on the quarter hour when Ronan Gallagher headed home. Jake Ellis had a good chance for the home side on 23 minutes bur he shot wide after breaking clear on the left-hand side. On 38 minutes, Precious Omochere forced McGing into making a good save. Harps added a second two minutes before the break when Darragh Ellison scored.

On the hour mark, Brandon Barr headed off the bar for Harps. The home side responded well after that. Substitute Evan Dunne pulled a goal back on 63 minutes after good work by Jake Ellis on the left set him up.

Dunne then scored a spectacular free kick on 73 minutes, curling a free kick in off the left-hand post.

McGing made another good save on 81 minutes to deny Jake Ellis. Harps had the better chances in extra time. Aouka went close on 92 minutes before Doherty crossed to O’Donnell who missed from close range. Aouaka shot straight at Minogue when well placed on 114 minutes. Jamie Doherty scored the winner for Harps two minutes from time when he shot home through a crowed box. 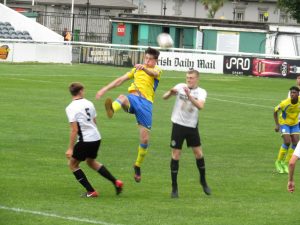 Harps were awarded a soft penalty in the final minute. Enda Minogue dived to his right to save the spot kick from Luke Rudden. 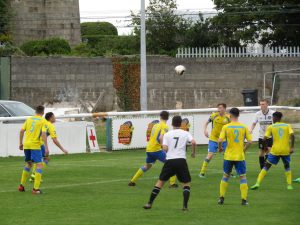