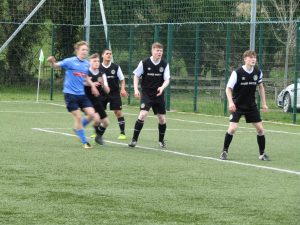 The SJ.B Academy under 19s suffered a narrow defeat at home to UCD in a game played in Berryfield, Enniskerry on Sunday afternoon.

Jake Ellis had the first shot on goal for the home side on seven minutes, but he was unable to hit the target. UCD’s Yaya Camara tried his luck from long range in the 13th minute but his effort went wide of Walkers post. Five minutes later, Walker saved brilliantly, tipping over a long range UCD shot. UCD had the ball in the net on 20 minutes but the effort was disallowed for offside.

On the half hour, Jake Ellis played in Lunat down the right wing, but the winger overran the ball and Williams gathered safely.

On the hour mark, substitute Adam Neto found himself clear in the area, but Williams saved well. UCD broke immediately and Camara forced Walker into a save.

The only goal of the game came on 70 minutes. UCD advanced on the left and the ball was pulled back to Jack Ryan who scored from inside the box.