The SJ.B Academy under 19s game away to Waterford FC last Sunday was postponed. Their next game is away to Shamrock Rovers on Saturday, 11th August. Kick off in Tallaght Stadium is 2.00pm.

The under 17s advanced to the semi final of the Mark Farren cup on Tuesday, 24th July when they defeated Shelbourne 2-0 at the Academy Grounds. Eoin Darcy scored both goals on 45 & 79 minutes.
Under 17 team v. Shelbourne: 1 Sean Coffey, 2 Cian Maher, 3 Jamie Crilly, 4 Alex Rafferty, 5 Cian Walsh, 6 Aaron rice, 8 Glen Hollywood, 9 Eoin Darcy, 11 Conor Dowling, 15 Callum Perry, 16 Precious Omochere. Subs: 30 Enda Minogue (GK) (for Coffey 42m), 7 Steven Sweeney (for Dowling 35m), 17 Nikolay Borowiec (for Hollywood 81m).
The under 17s are at home to Finn Harps in the semi final of the Mark Farren cup on Monday, 6th August. Kick off at the Carlisle Grounds is 3.00pm. Their next league game is at home to Shamrock Rovers on Saturday, 11th August. Kick off in the Academy Grounds in Carrickmines is 2.00pm. 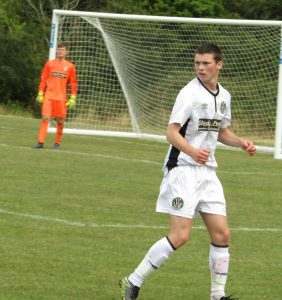