Wanderers made five changes to the starting team that were defeated by Limerick FC in wanderers last outing. Sean Heaney missed out through suspension while Sean Harding and Jake Kelly missed out through injury. Jamie Crilly and Rhys Gorman dropped to the bench. John Sullivan started for the first time since April having recovered from his long-term injury. Dylan Hayes, Cian Walsh, Ger Pender and Darragh Gibbons all same into the starting team.

President Michael D. Higgins was the special guest of honour at the game as Sligo Rovers celebrated 90 years of existence. Wanderers suffered a blow after just eight minutes when Dylan Hayes was forced off having suffered an injury.

Sligo had plenty of possession in the first half but Wanderers defence held firm. Drennan went close early on but chested past the goal after just two minutes. Rhys McCabe then headed just wide. Mark O’Connor pushed away a Lee Lynch effort on the quarter hour.

On 31 minutes, Kevin Lynch broke down the left flank and delivered a great cross which just evaded Ger Pender in front of the Sligo goal. 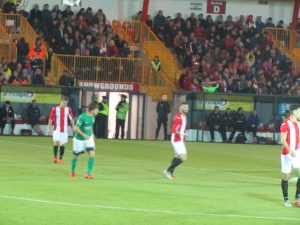 Wanderers joy was short lived as Sligo regained the lead straight from the kick off. Lynch’s cross from the right evaded Mark O’Connor and Mikey Drennan headed home the winner.

Defeat condemns Wanderers to the First division after fourteen seasons in the premier division.

SJ. B Academy week-end round up 07.10.2018Derry City match rescheduled