The Wanderers take on Limerick FC tonight at the Carlisle Grounds in what is a must win game in order to keep hopes of premier division survival alive. Previous games this season against Limerick have all been very close and tense encounters and tonight will be no different. We would urge every supporter young and old to get behind the seagulls tonight and help roar the team on to victory.

The Wanderers will of course be without long term injured players, Hugh Douglas and Andy McGovern. Goalkeeper Evan Moran will also miss tonight’s match with a head injury which was sustained during last weeks match against Waterford which saw Mark O’Connor come on in his place. Darragh Noone and Jamie Crilly are both carrying knocks and face late fitness tests, while there is some good news as Dylan Hayes this week resumed full training.

Speaking ahead of tonight’s match, Bray Wanderers manager Gary Cronin said,
“Tonight’s game for us is a must win if we are to hold onto any chance of staying in the top flight. While results haven’t been there for us in our last three games I’ve seen the effort in our group to give me confidence that we can pick up a win tonight. It should make for an exciting game given the position of both teams.

The attendance and atmosphere in our last home game was electric and the players need that continued support tonight and for the remaining games of the season. I’ll always appreciate the support and time the fans give to our football club. We’ll all do everything we can to get that much needed win tonight.”

Kick off at the Carlisle Grounds tonight is at 7:45pm and we have some special ticket offers available for tonight’s game and all of our remaining home games. 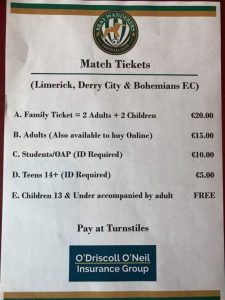