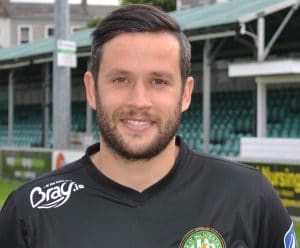 After getting his early experience with Trim Celtic and then Belvedere, Tim moved to Millwall in the summer of 2003. He spent a season there before spending three seasons in English non-league football, paying for Walton & Hersham, Weymouth and Fisher Athletic. He got his break in 2007, signing for Kilmarnock in the SPL on amateur forms. He later went on to turn out for Motherwell, Hibernian and St Johnstone in Scotland. Tim signed for Shamrock Rovers in February 2015 and moved on loan in July 2015 to Sligo Rovers until the end of the season. In January 2016, he made his move to the Showgrounds permanent for the upcoming 2016 season. He made seven league appearances before leaving the club in June 2016. Joined Bray Wanderers in July 2016.