Having waited over four months to begin their 2022 season, Bray’s U14 team made up for lost time by opening with a 4-2 home triumph over Cavan Monaghan.

A further goal apiece in the second and final third’s had the Green and White’s 4-1 up before the visitors grabbed a late consolation.

Seagulls stopper Alex Forde had to react well after just three minutes to block with his legs to thwart Cillian Costello.

Moments later at the other end, Josh Delves’ lob landed just over the bar. The winger was then denied by Max Waters in the sixth minute.

But that pressure paid off in the 12th minute. Released by a through ball up the middle by sub Sean Howard, striker Billy O’Neill beat two defenders and the offside the lift the ball over Waters from 16-yards into an empty net.

That lead however lasted just three minutes. The visitors were awarded a 15th minute penalty which was dispatched by Costello.

Bray went back in front in the 24th minute although it did have a bit of luck.

Billy O’Neill’s deflected effect from 14-yards came back off the post. Debatably offside, Jake O’Neill was first to the loose ball to side foot in from six-yards.

Straight from the tip-off, the home club won possession. Evan Lynch threaded a cross into the box from the left. Billy O’Neill span off his marker but fired his 15-yard haff volley just over the bar.

The second third was just ten minutes old when sub Billy Martin gained possession. He jinked his way into the box but saw his attempt came back off the far post.

But Wanderers went 3-1 in front in the 45th minute. Jake O’Neill’s cross-field pass from the right wide left saw Delves burst past an opponent. Then the winger deftly chipped a shot from the corner of the box that dropped to the net off the far upright.

With 17 minutes remaining, the victory was virtually sealed. From a free wide right in the danger of the six-yard area, the ball wasn’t cleared by the away defence. Sub Darragh Sherlock charged down a clearance with the ball rebounding low to the net.

Then in the 82nd minute, Jake O’Neill’s quickly taken from the left flank sent Billy O’Neill clear. But sub custodian Artan McPhaidann made a brave save with his body.

Elsewhere in the section, Galway United beat the Mayo League 7-2 at Kiltulla/Maree.

Bray are on the road on Saturday on Saturday July 9 next. They will take on Mayo at Milebush (kick-off 2.00pm). 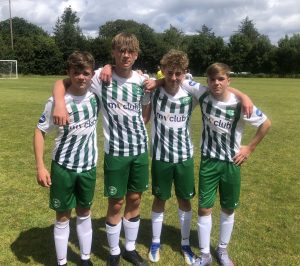 U19’s do Tier 2 Phase 2 double over Wexford.U17’s draw in Dundalk but miss out on Mark Farren Cup Quarter Finals