Bray ended their U15 EA Sports National Under League Group C campaign in stunning fashion after a comprehensive win over Drogheda.
Leading 2-1 after the first third on Sunday afternoon at Ballycorus, the Seagulls led 4-2 after the hour mark.
Then netted four times in the last 30 minutes to seal an 8-2 success.
In what perhaps was the most competitive section in the age group, Wanderers finished unbeaten in their final five games. And claimed fourth place, three points behind Shels in third.
One of those fixtures was a 5-0 away success over United last month.
But the having survived an early barrage and rode their luck, the Louth side hit the front after 18 minutes when Angelo Cosmin found the net from 25-yards.
However, the home teams response was swift and decisive.
Roddy Cotter’s 21st minute effort was blocked. But the defender followed up to bury a close range half volley.
And the turnaround was completed in the 24th minute. Cotter and Ethan Cheese combined off the left flank to set-up Darragh Emmett to expertly curl to the far corner from 16-yards.
Drogheda levelled in style in the 45th minute. Play continued as they appealed for hand ball as Nicolas Batyi struck a stunning 25-yard drive to the net.
Yet again, Bray hit back almost immediately.
In a team move in the 48th minute, Jack Nolan’s cross wasn’t dealt with. Rhys Knight slipped in sub Max Colbert to slot low to the net from 14-yards.
A two goal cushion was opened up on the hour mark. Sub Philip Cooney danced in off the left-wing. He played a one-two with Knight before converting low from just inside the box.
The final third saw the Green and White’s turn on the style.
Colbert’s 73rd minute solo run off the left flank saw him set-up Janek Sarwinski for his first goal of the season.
Five minutes later, Knight’s pass saw Emmet tangle with the away keeper. And Dylan Bourke pounced on the rebound for his first score of the campaign.
Custodian Sam Baker claimed an 82nd minute assist. His long ball was latched onto by Colbert to make it 7-2.
Then in the 85th minute, Emmett found the net from a tight angle after cutting into the penalty area off the left channel. 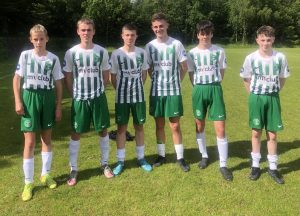 U19’s come from behind to earn a deserved draw away to St. Pat’sBray score six against Carlow/Kilkenny to set up final day U17 head to head with Shamrock Rovers and Shelbourne