Bray made it four games unbeaten after a thrilling U15 EA Sports National Underage League draw with Shamrock Rovers this evening.
A late equaliser at Ballycorus salvaged a draw for the Hoops in the Group C fixture.
The result meant Wanderers can’t claim third place in the section. But are guaranteed fourth spot.
But there was plenty of positives for the young Seagulls, with the goalkeeping duo of Sam Baker and Joe Collins excelling between the posts.
When the two teams met at the start of April last, the Dubliner’s won the reverse fixture narrowly 1-0 at the Roadstone Academy.
And the visitors took a 12th minute lead through Darragh Marshall’s penalty.
However, that lead lasted just a minute.
Ciaran Leeson fed Ethan Cheese whose slide rule pass slipped in Max Colbert in the left of the box. The striker held off a defender before driving from 15-yards to the far corner of the net.
It got even better for the hosts in the 17th minute. From fully 25-yards, Eric Schütte struck a cracking swerving free-kick that nestled in the roof of the net.
Baker made a number of vital saves as the Green and White’s led 2-1 after the end of the second third on 60 minutes.
In the final half hour, Collins made a crucial double stop just after coming on as substitute.
With eight minutes remaining, the visitors were awarded another spot-kick, although this one was disputed. But Collins superbly saved Richard Vodo’s penalty.
Yet, Rovers made it 2-2 in the 87th minute. After good work by Christian Donlon-Goncalves, Marshall’s effort took two deflections before bobbling over the goal-line.
The result see Rovers join UCD at the top of the table with one game remaining in the section.
Bray complete their programme of matches on Sunday (May 22) at Ballycorus when they play host to Drogheda United. Kick-off is set for 2.30pm. 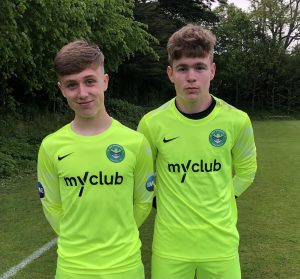 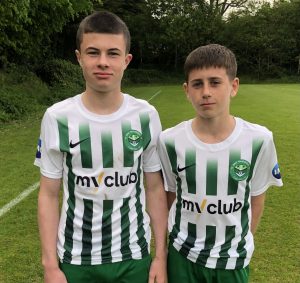