Bray Wanderers continue their 2020 First division league season with a home game against University College Dublin at the Carlisle Grounds on Friday, 14 August. Due to Covid restrictions the match will be played with only 200 people allowed into the ground on the evening. This includes staff, players, media and a very limited number of spectators.

Friday’s game will be the 80th meeting of Bray Wanderers and UCD in all competitions. Wanderers lead the head to head with 32 wins against 24 for UCD. The sides have met 59 times previously in league meetings. Wanderers have won 21 with UCD recording 20 league wins.

The sides last met in 2016 when Wanderers defeated UCD in the league cup and UCD defeated Wanderers in the FAI cup. Its six years since the last meeting between the clubs in the league. Goals from Ismahil Akinade and Jake Kelly gave Wanderers a 2-0 win at the Carlisle grounds in August 2014.

Not in front of the Children

Is there ever a time that is better than another for a crisis to come along? 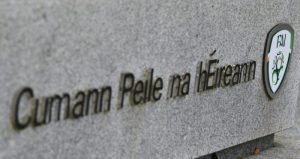 Of all the sporting organisations in the country, the FAI was probably the worst placed, the least prepared and the most precariously balanced this Spring when Coronavirus blew in. The new season was just getting into its stride, and the Association’s administrative body was – metaphorically speaking – drawing its breath after a bruising 12 months that had seen bad news followed by worse, and its private business paraded in the prints for all to see.

And then, wham! End of football for the foreseeable future, and plenty of time for the media and the fans to mull over the entrails. In a way, it was a fortuitous blessing that all this was happening just 30 years after the glorious campaign that brought us all (even those who didn’t travel) to Italia 90. It gave the newspapers something to write about for at least part of the time.

Like most other sectors of the community, football approached the gradual relaxation of the lockdown, when it came, with a mixture of “hold me back and let me at him” and trepidation: how would it work? Would it be sensible to go back to the game without the fans, or with very few of them? Should the season be abandoned, or cut short, or just resumed? And in any of those cases, what format and what regulatory changes would be required?

Not to mention the purely health-related changes to squads’ routines and requirements, which make things cumbersome, time-consuming, and in some cases uncomfortable.

And lo and behold, the spectre of what the journalists of the 1930s called “clubism” rises above the highly publicised arguments about how to get things going again, taking a little of the harsh spotlight away from Abbotstown.

“Clubism” consisted of putting one’s own club’s wishes and priorities ahead of all others, and (usually) ignoring any arguments on the other side, no matter how compelling. It may be a term that has long gone out of use, but the phenomenon hasn’t, and it was all too visible in the less than edifying sequence of partially leaked negotiations between the clubs and the FAI about how the resumed and reduced season would work.

For once, however, things weren’t as bad as they appeared. Behind the scenes, the FAI had been active, engaged, and fully transparent, says Bray Chairman Niall O’Driscoll. From day one, though things were very difficult. Niall gives a lot of credit to Gary Owens for how the whole potentially disastrous situation was handled.

“They were very professional, very clear. We met them on a regular basis, and all the financial options were fully explored. The process was very thorough. It could have fallen apart, but even though some mistakes were made, it didn’t” he tells me.

The biggest problem, apparently, and as one might have deduced from the media reports, was the lack of a common approach among the clubs. “The League may be two Divisions” he goes on, “but there are at least three groups of clubs: the top three, the rest of the Premier, and the First Division.”

I demur a little, arguing that the Premier is more like three groups in itself; he doesn’t disagree, but we move on. “The First Division clubs were very strong during the whole process” he says. “They seemed to be more able to act collectively, possibly because there was a lot of communication between us, as a group, on a regular basis.”

“The Premier clubs seemed to be acting more like individuals.”

That may have been understating it a little – certainly if one were to go by the smoke-filled room reports that were circulating at the time. And if there is just a hint that the top-flight teams were a teeny little bit opaque, arguing their cases in what could be seen as a self-serving manner, that may be entirely my fault.

In a strange way, the enforced additional communication between Association, League and Clubs during the early part of this year has if anything given added momentum to the movement towards greater involvement of the Clubs in the administration of the League, something that had been on the cards for a while in any case.

“The FAI is more open to establishing a working partnership with the Clubs than it used to be” says O’Driscoll, though I gather there is still some distance between the two, with the shadows of previous attitudes in relation to power and control still around the room.

Unfortunately, the Association still has some distance to go when it comes to tidying up the mess left behind by the Delaney years. And still more unfortunately, too many external parties have had their fingers in the pie, to the extent that in other circumstances FIFA would be jumping up and down about Governmental interference with the national association.

And leaving aside the advisability of establishing a 50-50 split on the Board, giving outside directors what many would see as a disproportionate influence on the inner workings of our game, it is dispiriting to see senior representatives of the Association relying on evasive tactics more usually seen among the political classes: think of Ministers trying to dodge difficult questions.

Look at a couple of quotes from the independent Chairman, Roy Barrett: “At a Board meeting of the FAI on January 28th, I updated my fellow directors on discussions with the various stakeholders and they mandated me to reach agreements…” and later in the same statement “Late on the evening of January 29th, I was furnished with a copy of the Memorandum of Understanding…”

Where was the negotiation in that sequence of events?  I’m not quite sure why I am reminded of remarks made by then British Prime Minister Neville Chamberlain after his meetings with Hitler in 1938: “This morning I had another talk with the German Chancellor, Herr Hitler, and here is the paper which bears his name upon it as well as mine… I believe it is peace for our time.”

Chamberlain kept Parliament, and the people, informed about what he was negotiating for. It is a constructive approach, a matter of treating your constituents as grown-ups. But independent directors, in the nature of things, don’t have constituencies in the football community.

The reconstruction of the FAI has a long, long way to go yet.

Writers deal in fiction, and poets especially deal in flights of fancy. The above line-up though could be rooted in reality – you could interpose an actual footballer for the writer he shares his surname with.

John Trollope is a Swindon Town legend. As a defender he played 770 league games for them between 1960 and 1980, still an English record for most league games for one club by an outfield player. He was made an MBE for his services to football. His son Paul also played for Swindon, as well as Torquay United, Crystal Palace, Derby County, Grimsby Town, Fulham, Coventry City, Northampton Town and Bristol Rovers in a career that spanned the years between 1989 and 2007. I guess the advice from father to son at the outset of the latter’s football career was “maybe move around a bit, son”. Paul, who is on my substitutes bench, was a midfielder and won nine Wales caps.

Liverpool fans of a certain age will remember Ron Yeats. Liverpool fans of all ages will be familiar with the myth. Everton fans used to sing “We hate Bill Shankly and we hate Ian St. John / but most of all we hate Big Ron” during Merseyside derbies during Yeats’ time at Anfield (1961 to 1971). Let’s just say he was a tough defender to have marking you.

Alex Beckett played for St. Mirren and the defender was voted by the club’s fans into their Hall of Fame. Phil Hardy completes the defence. The former Republic of Ireland Under 21 international played 349 times for Wrexham between 1990 and 2001 and also had a season with Port Vale.

The midfield at the outset looks most impressive to the eye. Dickens, Shakespeare, Wordsworth, Heaney. But alas it isn’t Charles, William, William and Séamus. No, step forward Craig, Alan, Anthony and Neil.

Craig Shakespeare played as a midfielder with Walsall, Sheffield Wednesday, West Bromwich Albion, Grimsby Town and Scunthorpe United in a career that lasted from 1981 to 2000. He is perhaps best known now as the guy who took over from Claudio Ranieri after the latter was sacked shortly after winning the Premier League with Leicester City.

Alan Dickens played in midfield for Chelsea and West Ham during the 1980s and 1990s, and was a member of the West Ham ‘Boys of ‘86’ (the club recorded their highest-ever top-flight league placing). He stood in as a striker when Frank McAvennie departed Upton Park. Anthony Wordsworth currently plays in midfield for AFC Wimbledon. Neil Heaney was a midfielder active between 1989 and 2002, playing for Arsenal, Southampton, Manchester City, Charlton Athletic, Bristol City, Dundee United, Darlington and Plymouth Argyle.

My strike partners aren’t Scottish poet Robert Burns and Irish scribe James Joyce, but Kenny Burns and Chris Joyce. Kenny was a versatile player who could play in many positions, and was first converted to a striker (from a defender) at Birmingham City. He had a lengthy career, playing from 1971 to 1993, with stop-offs at Nottingham Forest, Leeds United and Derby County as well as Birmingham. He also won 20 caps for Scotland between 1974 and 1981.

Chris Joyce is an interesting guy. An English striker who went to Norway, he married a Norwegian girl and has spent his entire career in Norwegian football. Nearing the end of his playing days now, he is currently with Tollnes.

So, the substitute bench. For my reserve goalkeeper I have Harry Hardy, who played for Stockport County in the 1920s and earned an England cap while at the club, still the only Stockport County player ever to achieve this while at the club. Substitute defenders are Aaron Hardy, formerly of Huddersfield Town and currently of Tadcaster Albion, and Leo Dickens who played in the Football League for Chester City in the 1950s, combining his football with his work on the railways.

My midfield substitutes are the aforementioned Paul Trollope and also Billy Hardy, who played in the 1927 FA Cup Final for Cardiff City (they beat Arsenal to become the first – and still only – club from outside England to win the trophy). Substitute strikers are Tom Pope, a current player who is with Port Vale, and Arthur Hardy, who played with Derby County way back in the 1890s.

For my manager I have gone with Stan Hardy, who played for Newcastle United just before World War One and managed Nottingham Forest in the early 1930s.

So there you have it. A work of fiction? Absolutely! Enjoy the game on Friday, whether you are attending or watching via a streaming service. Hopefully we can recover momentum after the loss in Drogheda last week. C’mon Wanderers!