Under 17 ladies win in Cobh 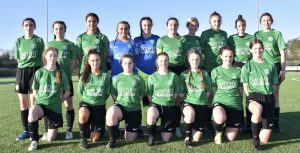 On an historic day in more days than one, Bray/Greystones came from behind to secure all three U17 EA SPORTS Women’s U17 National League of Ireland

points in their opening contest of the 2022 season.

The fixture on Saturday evening was the first-ever under the banner of the two Wicklow clubs following last December’s announcement. But the match was also Cobh’s first ever in the Women’s National League at this level.

Ramblers got off the perfect start on the Stephen Ireland Park Astro at Oldchurch Park when Aine Griffin gave them a 1-0 lead.

But the visitor’s response was immediate with Amber Quinn levelling matters.

However, the hosts led 2-1 at the break as Muireann Deasy converted a penalty on the stroke of half time as the away outfit were left to rue missed chances in the opening period.

To their credit, the Green’s battled after the interval. Their hard work was rewarded with a 72nd minute Ella Gavin equaliser.

Then just three minutes later, Emma Cullen popped up with proved to be the winner with a close-range header after the ball had come back off the crossbar.

Bray/Greystones return to the Woodlands next Saturday (March 12) to entertain Cork City.