Under 19s defeated by Cobh

Three second half goals saw Bray suffer an opening day defeat in Group A of the U19 EA Sports National Underage Leagues. But the Seagulls was left to ponder a series of missed opportunities in the first period that would have given them a lead their play deserved on Sunday afternoon at Berryfield Park in Enniskerry.

It could have been a totally different story had Cillian Melwani’s 25-yard shot in the 15th minute bounced back off the crossbar and over the goal-line instead of onto it. Five minutes later, Josh McGlone teed up Evan Harte, but the striker curled narrowly wide from 20-yards. In the 33rd minute, skipper Sam Hayden slipped in Zack Donohue along the left flank. His low centre saw Harte get ahead of his marker. But the low finish went agonisingly just past the far post.

Bad luck befell the hosts in the 52nd minute as Robert Walsh’s corner was inadvertently diverted into his net at the near post by a challenging Bray player. Ramblers’ custodian Gavin Ryan saved well from McGlone two minutes later.

Bray custodian Kajus Aksamitas then denied David Eguaibor on the hour. Moments later at the other end of the pitch, Harte’s downward header off Melwani’s cross bounced wide. Within seconds, Cobh had made it 2-0. Wanderers claimed a foul. But play continued as Craig Doherty set-up David Eguaibor for a simple tap. 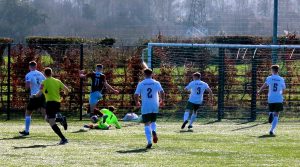 The Green And White’s pulled one back on 71 minutes.. Donohue squared infield from the left to Harte to hold up. Donohue took the return pass and passed to the breaking Gavin Doyle inside the penalty area. He flicked over Ryan and the ball dropped over the line despite the netminders best efforts to keep it out. Wanderers went close to levelling matters on 74 minutes. But Ryan smartly gathered Donohue’s placed effort off Melwani’s cutback. The Cork outfit sealed victory in the 76th minute. From Justin Eguaibor’s long throw from the right in his own half went to the hallway line. From a tackle amongst a group of players, Tiernan O’Brien McAllister raced clear to slot low in from 12-yards.

Bray are on their travels next Sunday (March 13) when they take on Cork City at Bishopstown. 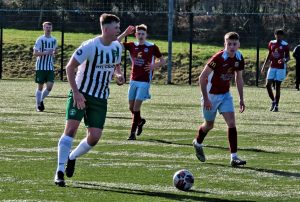 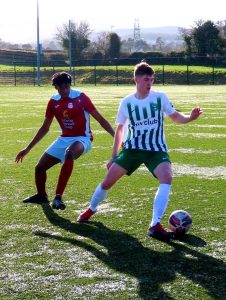 Club to make donation to UNICEFUnder 17 ladies win in Cobh