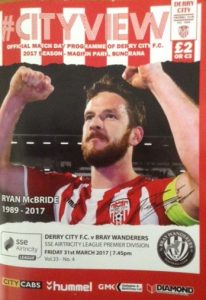 Tim Clancy’s powerful header, two minutes into added time, gave Bray Wanderers their first away league win over Derry City since January 2001. Wanderers had failed to win away to Derry in their previous 19 visits.

Wanderers can thank man of the match Peter Cherrie for a string of saves to deny Derry throughout the match.

Wanderers made one change to the team that was defeated by Limerick FC the previous week. Keith Buckley returned in midfield with Aaron Greene operating as the lone striker in place of the injured Anto Flood.

Within the first minute, McEneff fed Patterson but the striker could only find the side-netting. On nine minutes, Aaron Greene shot just wide after Dylan Connolly’s flick had created the chance.

On 16 minutes, Patterson forced a splendid save from Cherrie who tipped the ball onto the crossbar. The follow up also came off the bar before been cleared. Wanderers were awarded a free kick on 27 minutes. Gary McCabe curled the ball around the wall and low into the right corner of the net for his sixth league goal of the season.

Straight from the kick off, Derry attacked and Cherrie produced another great save, this time, from Schubert. Curtis then headed a McEneff corner over the bar. Two minutes before the break, Wanderers counted attacked. Mark Salmon played in Greene on the left and he cut in to fire past Doherty.

Derry lost Doherty at half order synthroid without prescription time with an injury. On 48 minutes, McDermott was booked for bring down Connolly on the edge of the area. McCabe’s free kick forced Grimes into saving and Kenna was unable to force home the loose ball.

Cherrie made another great save on 50 minutes. On 64 minutes, Derry were awarded a penalty after a goalmouth scramble following another Cherrie save. Despite Bray’s protests over the award, McEneff scored the resultant penalty

Derry continued to pile forward and Curtis and Schubert both had chances for the home side. On 81 minutes a rare Bray break ended with Jason Marks curling a shot just wide of the left-hand post.

On 81 minutes, Jarvis cut in from the left and lobbed over Cherrie to equalise. Two minutes into added time, a Connolly run down the left resulted in a Bray corner. Darragh Noone’s corner from the left was powerfully headed to the net by Clancy to earn the visitors all three points.