After finding themselves two goals down with 13 minutes played Wanderers responded with a better second half display before been killed off by a late third Drogheda goal. 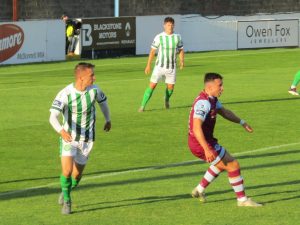 Wanderers made one change to the starting team from the team that defeated Longford Town last Monday. Paul Keegan returned in midfield in place of Jack Watson.

The home side took the lead after ten minutes when Mark Doyle slotted home from inside the box after controlling allow Brandon Bermingham’s cross which Wanderers failed to clear. Three minutes later, James Clarke doubled the lead with a superb volley. Brian Maher saved well from a Brandon Bermingham free kick before saving another Berrmingham effort a few minutes later as the home side threatened to seal the game early.

Wanderers gradually came into the game and Killian Cantwell forced Odumosu into saving his header following a Keegan free kick just past the half hour. Sean McEvoy had a couple of shots on goal which Odumosu saved easily. Gary Shaw found the side netting in the 39th minute, but the striker hobbled off injured on the stroke of half time. 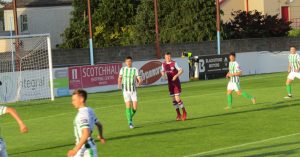 Wanderers were much improved in the second half and pulled a goal back on 53 minutes. Sean McEvoy slotted home his first goal for the club from just inside the box to give the visitors hope. Following a counter attack, Callum Thompson broke free down the left and spotted the unmarked Daly on the left. Daly’s shot beat Odumosu but was cleared off the line by a Drogheda defender. Daly then shot just over from the resulting corner after the ball broke to him on the edge of the area.

Killian Cantwell drove a shot just over the cross bar on the hour mark as Wanderers enjoyed a good spell. McEvoy forced Odumosu into a save on 74 minutes with another long-range effort.

Wanderers were caught out by a Drogheda break three minutes from time when Stephen Meaney poked home from close range following a cross from Bermingham on the right to seal the win.