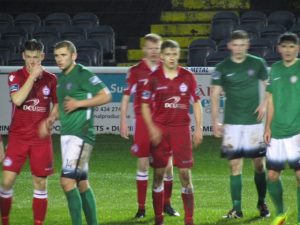 Wanderers made nine changes to the starting eleven from their previous game against Bohemians last Friday. There were first team debuts for Evan Moran, Andrew McGovern and Dylan Hayes.

Jake Ellis did well on the 20 minutes mark and held up the ball before feeding Paul O’Conor who fired straight at Steacy.

Shelbourne took the lead on 24 minutes when James English’s header looped over Moran. Shelbourne doubled their lead five minutes later. English crossed from the right to Boyne who duly fired past Moran.

Wanderers had a let off on 40 minutes when English went down in the area after a challenge from McGovern. The striker was duly booked for a dive.

Calvin Rogers had  a strike at goal on 55 minutes but his effort went just wide of Steacy’s goal. 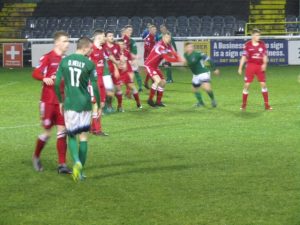 Shels added a third on 61 minutes when English headed home from a Davy O’Sullivan cross. O’Sullivan saw his shot on 75 minutes strike the top of the Bray crossbar.