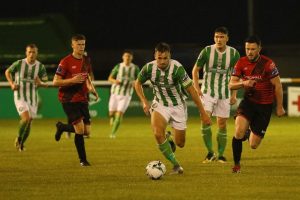 Wanderers rounded off their 2019 season in style and extended their unbeaten league run to eight games with this win over Drogheda United.

The home side made two changes to the team that defeated Longford Town a week previous. Dylan Thornton and Joe Doyle started in place of Paul Keegan and Darragh Gibbons

Wanderers started well and took the lead after five minutes. Joe Doyle nudged the ball past Paul Skinner and was brought down by the keeper. Dean Williams converted the resulting spot kick. Hugh Douglas forced Skinner into a save from a header on 23 minutes.

Wanderers doubled their lead just on the half hour. Dylan McGlade picked the ball on the left and went past ex-Wanderer Luke Gallagher before scoring low past Skinner.

Two minutes before the break, McGlade created a chance inside the area for Dean Williams who scored from close range. Williams almost got his hat-trick on the hour mark but was denied by a goal-line clearance from Luke McNally.

Drogheda pulled a goal back on 58 minutes when local Bray lad Chris Lyons scored his 14th goal of the season by firing to the roof of the net. Killian Cantwell denied Drogheda a second in the final minute when he cleared off the line following a goalmouth scramble.

Under 17 top scorer Darragh Lynch came off the bench with nine minutes remaining to make his first team debut. In stoppage time, McGlade broke clear on the left and lifted the ball over Skinner to seal the win for Wanderers 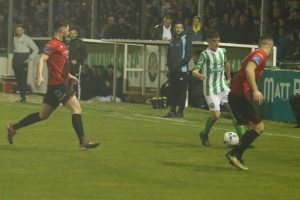