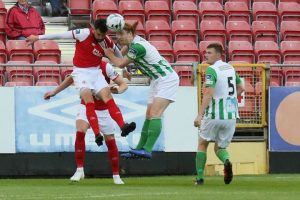 Wanderers went out of the FAI cup at the first-round stage for the fourth consecutive season despite a brave display against premier division opposition. 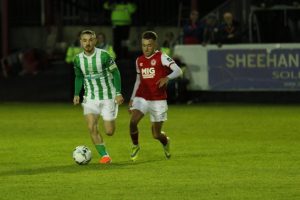 Wanderers made two changes to the starting team from last week’s win over Wexford. Philip Gannon and Hugh Douglas started in place of Luke Nolan and Jake Ellis.

Wanderers made a lively start despite considerable pressure early on from the home side. Simon Madden saw yellow on12 minutes for simulation with a dive in the Bray area. Paul Keegan then followed him into the book on 18 minutes for a foul on Clarke. Darragh Markey fired against the Bray crossbar on 21 minutes. Four minutes later, Simon Madden’s low shot rebounded off the post as the home side increased the pressure. 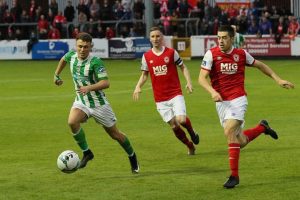 Conor Clifford fired a shot over the Bray crossbar on 52 minutes following a one-two with Dean Clarke. Three minutes later, ex-Wanderer Dave Webster played a one-two with Clarke and slotted the ball under Sava for the equaliser.

Wanderers responded well. Dylan McGlade went on a run on the hour mark, rounded Clarke and saw his shot cleared off the line by Jamie Lennon. On 62 minutes, Sava turned Lee Desmond’s effort around the post. At the other end, Clarke saved from Joe Doyle on 66 minutes before Dean Williams shot wide from the rebound. Killian Cantwell then shot into the side netting as Wanderers enjoyed a good spell.

On 75 minutes, substitute Glen McAuley went past Paul Keegan on the left and cut in before firing past Sava for the winner.