It was a memorable night in Buncrana for Bray Wanderers with victory being secured with a powerful injury time header. In all the excitement let’s not forget the night and all that went before.

Our players and staff were a credit to the Club and themselves in the way they respected Derry City and their football family and the memory of Ryan McBride. 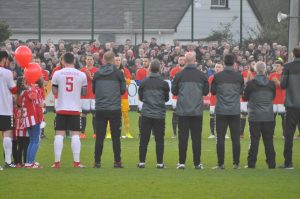 It was an honour for Bray Wanderers football club to be part of such an Occasion. Especially generic for synthroid medication when you consider that Ryan made his league debut for Derry City against Bray Wanderers FC at the Carlisle Grounds on 20th of May 2011

Ryan came on as a sub to replace Emmett Friars on that night.

Rest In Peace Ryan. You will not be forgotten”