Wanderers hopes of reaching the First division promotion play offs hang in the balance after dropping two points to a late Galway equaliser in a game that the visitors should have wrapped up in the first half.

Wanderers made three changes to the starting team from last weeks win over Limerick FC. Darragh Gibbons, Brandon McCann and new loan signing from Waterford FC, John Martin all started in place of Richie Purdy and the suspended duo of Paul Keegan and Killian Cantwell.

On a rainy night with heavy showers, Wanderers started well and had a couple of early chances with Derek Daly firing a long-range effort to test Horgan and then Sean Heaney going close with a header from a free kick within the opening five minutes. John Martin then fired a long range shot which rebounded off the post and struck Horgan on its way out and ended up in the net for the opener on six minutes.

Barnett and McGlade were causing the Galway defence plenty of problems on the left-hand side. The home side should have equalised on 19 minutes, but Conor Layng put the ball over the bar with the goal at his mercy from a low cross on the right.

Just past the half hour, Horgan saved brilliantly from a Brandon McCann header that almost looped over the keeper before he touched it over the bar. From the resulting corner, Wanderers had strong claims for a penalty as the ball appeared to come off the arm of a Galway defender as he tried to clear under pressure.

Dean Williams saw a shot deflected out for a corner on 37 minutes and then Horgan saved from him just before the break when he got in behind the defence. On the stroke of half time, Galway equalised when Layng pounced on a defensive error to slot past Sava.

Five minutes into the second period, McGlade picked up the ball on the left wing and went past a couple of defenders before slotting into the right-hand corner beyond the dive of Horgan. Three minutes later, Horgan saved from close range to deny Williams as Wanderers looked to seal the win. McGlade shot wide on the hour mark after a great through ball from Martin.

Sava produced a great save on 69 minutes from Kelly after a good move put him clear. Derek Daly fired a free kick inches wide of the Galway post and Martin headed just wide from a McGlade cross. Wanderers paid the price for all the missed chances when Vinny Faherty got his head onto a long ball into the box and headed past Sava for an equaliser. Galway had the ball in the net minutes later, but their joy was short lived as Sava was fouled while catching the ball. 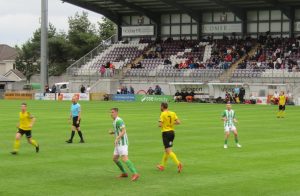