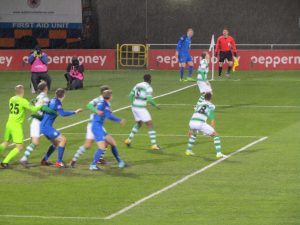 Shamrock Rovers ran out comprehensive winners at the Tallaght Stadium tonight as Wanderers collapsed in the second half. The early stages of this game produced little to trouble either keeper. The deadlock was finally broken in the 27th minute when Graham Burke’s 30 yard strike struck the underneath of the crossbar and bounced over the line.

Two minutes into the second half, Rovers added a second. Sean Kavanagh’s low cross from the right was swept home by Miele at close range.

David McAllister headed home a Carr cross on 61 minutes for the third goal. Trevor Clarke played Carr in for the fourth two minutes later and Kavanagh smashed a 68th minute past Dillon net from just outside the box. Rovers added a sixth in the final minute when Miele scored his second of the night.