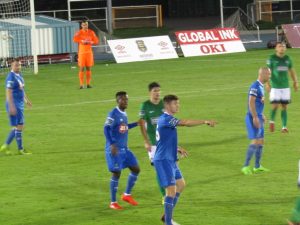 Wanderers were unchanged from the side that were defeated by Shamrock Rovers in the teams last outing. John Sullivan made a welcome return to the squad having missed the last five months out with an injury.

Rory Feely headed over for Waterford FC from Aborah’s early corner kick. Waterford were on top in the early stages and ex-Wanderers Cory Galvin looked lively on his debut for the Blues. Galvin fired a couple of long-range efforts on goal but Evan Moran was equal to them.

Wanderers then lost Moran to an injury after he was fouled in the area. Mark O’Connor replaced him for his debut. Within a minute, he was picking the ball out of the net. On 38 minutes, Galvin’s through ball put Sander Puri away and he fired past O’Connor. O’Connor then saved from a Kenny Browne on the stroke of half time.

Waterford wrapped up victory in the 72nd minute. Rory Feely’s cross from the right came to Darragh Gibbons but his attempted header clearance went straight to ex-Ireland international Noel Hunt who duly fired past O’Connor.

SJ.B under 17 player Jamie Crilly replaced Darragh Noone with ten minutes remaining to become the latest player from the SJ.B Academy to make their first team debuts for Wanderers this season.

Wanderers best chance of the game fell go Ger Pender a minute later. Pender robbed Kenny Browne of possession on the edge of the area but his shot was well saved by Niall Corbet.

Wanderers now trail Limerick FC by nine points with just five games remaining. The Shannonsiders are visitors to the Carlisle grounds next Friday in a must win game for Wanderers.