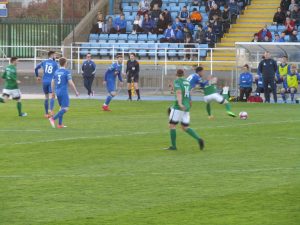 Wanderers made one change to the starting eleven from the team that defeated Shamrock Rovers four days previous. Jake Kelly started in place of the injured Aaron Greene. Bray Wanderers paid the price in the second half for not taking their first half chances when they were on top.

The home side started strong in a bid to maintain their 100% home record but the Wanderers defence coped with Waterford’s early pressure. Wanderers then came into the game and created a number of chances. On 28 minutes, Gary McCabe created a chance on the right. His shot took a deflection and fell into the path of Ronan Coughlan at the back post. With the goal at his mercy Coughlan put the ball outside of the post.

Waterford broke the deadlock on 53 minutes when Kasmi saw his first effort blocked but fired the rebound home. Wanderers changed formation with a double substitution on the hour mark and went with three centre halves, pushing the two full backs further forward into wide midfielders.

Wanderers second half performance never matched their first half and The Blues wrapped up the victory in the final ten minutes. On 81 minutes Kasmi saw his shot blocked but the ball fell to Derek Daly and his shot took a slight deflection to beat  Dillon. Four minutes into stoppage time Kasmi added his second of the night with a low strike past Dillon.