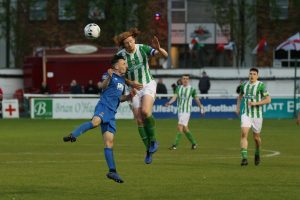 Scott Twine’s free-kick on the quarter hour settled this tight league cup quarter final as Bray Wanderers bowed out after a brave display..

Wanderers made six from the team that defeated Wexford FC last Friday. Hugh Douglas, Darragh Gibbons, Joe Doyle, Dylan McGlade, Luka Lovic and Brandon McCann all started in place of Derek Daly, Jake Ellis, Philip Gannon, Paul Keegan, Richard Purdy and the ineligible Dean O’Halloran who is on loan from Waterford FC. Waterford made four changes to their previous line out over UCD the previous Friday.

Ex-Wanderer Cory Galvin went close after just ten minutes when he fired into the side netting after being set up by another ex-Wanderer Ishmahil Akinade. Akinade was causing Hugh Douglas plenty of problems with his physical strength. From a Blues attack, Akinade forced a free kick from Douglas just outside the area on the quarter hour. Scott Twine stepped up to curl a shot over the wall and beyond Sava into the net.  Cory Galvin forced Sava into two good saves as the Blues stepped up the pace. Wanderers responded well to going behind. Dylan McGlade had a couple of long range shots that forced Connor into saves. On the stroke of half time Joe Doyle broke free on the right but delayed his shot and Maxi Kouogun eventually forced him to shooting wide.

On the hour mark. Wanderers took a quick free kick which led to Luke Nolan playing in Joe Doyle on the right and his shot struck the post. Akinade brushed aside Darragh Gibbons and set up Twine who blasted over with the goal at his mercy. Akinade then shot wide when he broke clear on the right. Wanderers threw extra men forward in the closing stages as the game became stretched. Shane Griffin forced Sava into a late save. Wanderers then had a great chance to send the game to extra time in the final minute but Doyle shot wide when well placed.