Wanderers made six changes to the starting line up from the team that defeated Limerick FC the previous Friday. There was a welcome return to the team for defender Hugh Douglas after a long term injury. Adam Hayden; Jake Ellis, Luka Lovic, Brandon McCann and Richie Purdy also came into the starting line-up.

Wanderers started on top with Luka Lovic testing Chambers in the Wexford goal on twenty minutes. Wanderers eventually made the break through on 25 minutes. 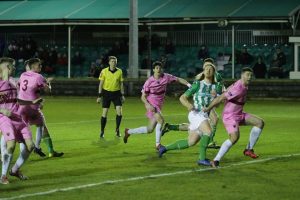 Sean Callan saw yellow for bringing down Derek Daly on the edge of the area. Daly took the resulting free kick and fired low under the wall and into the bottom right corner of the Wexford net. Four minutes later, McGlade set up Barnett and his shot took a wicked deflection to deceive Chambers for number two. On 36 minutes, Richie Purdy was fouled in the area and Dylan McGlade duly dispatched the resultant penalty past Chambers.

Wexford improved after the break and pulled a goal back three minutes into the second half. Ryan Nolan fired home a free kick from 30 yards for Wexford.

Jake Ellis had a great chance to wrap up the game for Wanderers on 85 minutes. Luka Lovic’s through ball put Ellis clear and with just Chambers to beat the striker put the ball outside the post. Three minutes into added time Sean Roche fired home for Wexford from just inside the area.