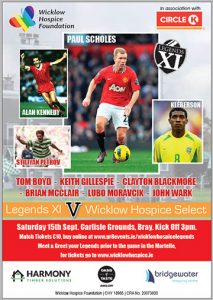 Paul Scholes & Stiliyan Petrov are among the impressive line-up of football legends who will play at Bray’s Carlisle Grounds in aid of Wicklow Hospice on Saturday 15thSeptember.
Other legends confirmed include former United stars Keith Gillespie, Brian McClair, Jose Kleberson & Clayton Blackmore. Meanwhile Stiliyan Petrov will be joined by fellow Celtic greats Lubo Moravcik & Tom Boyd whilst Alan Kennedy & John Wark will fly the Flag for the Liverpool supporters.
The star-studded team will play against Wicklow Hospice Select Teams, who are set to put the English & Scottish Club legends through their paces.
Bray Wanderers’ legends including Colm Tresson, Kevin O’Connor & Matt Britton will be among the local line-up along with Gary Messett, Captain of the Irish CP team, who have just won European Championships Bronze in the Netherlands. They will be supported by some of Wicklow’sfinest (and bravest!) footballers from amateur Clubs including six warriors from The Garden County Over 35’s Football Club.
WHF expects the 3,500–capacity match to sell out quickly. Event organizer, Marie Kindlon says tickets have been flying out since ticket sales went live:
The reaction has been phenomenal. Word is spreading fast & we even have fans coming over from England & Scotland for the event. These players are among the biggest & best football legends in the world.”
This is the first-time Scholes has played in Ireland since his retirement from professional football in 2013 & it won’t be his last – ten days after the Bray match, he’ll be joining the Squad at the Liam Miller Tribute Match in Cork.
The event will lead to significant fundraising for the new Hospice in Magheramore, which is currently under construction & will open for the first patients next year.
Circle K Ireland, which celebrates its high-profile re-brand from Topaz to Circle K this year & has 15 sites in CountyWicklow, has come in as the generous main sponsor of the WHF event.
WHF hopes to raise a six-figure total between sponsorship, ticket sales, the Legends’ Gala Ball, grand auction & other activities.
Ticket details:
o Match Tickets are €10 each & available from gr8events.ie
o Limited Meet-and-Greet at Martello Bray (before 3pm kick-off) are €60 each & available from www.gr8events.ie.
o Tickets for Gala Legends Dinner are €60 each, contact Marie mkindlon@hotmail.com/086 3768898 or Sinead on 0870954137/sinead@wicklowhospice.ie for more details.