Bray Wanderers had never won their opening three premier division games before. The visitors looked to be on course to achieve this after two goals within a minute, just have the restart, had them in a commanding position. However, Dinny Corcorcan inspired a home team comeback with a double either side of Keith Ward’s goal to inflict a first league defeat of the season on Harry Kenny’s team.

The opening period provided little in goal attempts. Peter Cherrie pulled off a great save after just 12 minutes to deny Bohs. Keith Ward smashed a free kick off the Wanderers crossbar on 42 minutes. 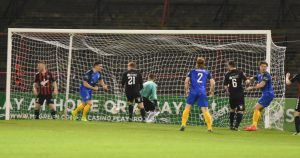 Wanderers took the lead on 47 minutes when Gary McCabe’s low corner from the left evaded everyone at the near post and John Sullivan tapped in at the back post. Wanderers re-took possession immediately from the kick off and Dylan Connolly found himself free in the box to fire low past Supple to double the visitors lead.

Bohemians responded on 53 minutes when a loose header from Douglas fell into the path of Dinny Corcorcan who raced clear to fire past Cherrie. Anto Flood curled a shot off the Bohs crossbar on 64 minutes. Wanderers were caught by a counter attack on 69 minutes when Corcorcan eventually fed Ward who slotted the equaliser past Cherrie. On 73 minutes Connor Kenna headed just wide at the back post from a Lynch free kick on the right. 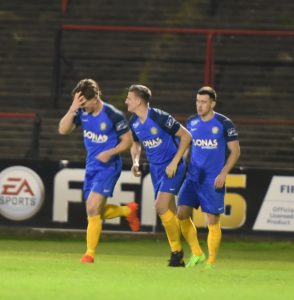 Wanderers defence were caught out again on 78 minutes when Corcorcan scored his second. In injury time, Dylan Connolly went down in the box after a tackle from a Bohs defender but referee Hennessy showed him a yellow card 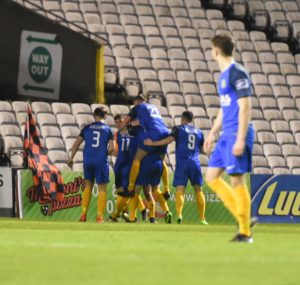