Joe Doyle is a man among the goals, with four goals now in his last two games at the Carlisle Grounds.

The return of a limited number of home supporters in recent weeks seems to have given the team a boost, and none more so than our striker Joe Doyle.

He netted two in the 4-0 win over UCD on June 18th and followed that up with an all-important brace against Cobh Ramblers as The Seagulls came from behind to win 2-1 on Friday night.

In between, he also played in the scoreless draw away to Athlone and with Bray now unbeaten in three, Joe was naturally pretty satisfied when he spoke to our media team after the win over Cobh.

“I’m delighted, they just seem to be falling for me these days,” Doyle said. “I could have had a couple more in both games but I’ll take four goals in three games, home and away. The most important thing is to get back to winning ways.

Back-to-back doubles at home is nothing to be sneezed at but it could have been even better if a late chance for a hat trick against Cobh hadn’t have inched just wide.

“I think I just gave it socks there! I kinda ran out of energy,” Joe admits. “It was falling at my feet and I just tried to clip it through the keeper’s legs but it just trickled by the post.” 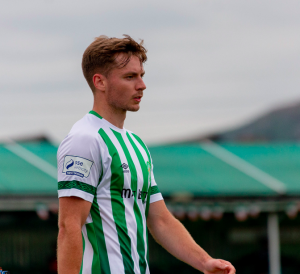 Joe Doyle on getting a run in the team.

Doyle is now enjoying an extended run in the team after some injury issues at the beginning of the campaign and he is clearly enjoying the responsibility of putting the ball in the back of the net.

“”I’m delighted, I was out at the start of the season with a bit of an injury but I’m loving it now. The most important thing for a striker is to get goals and that’s what I’m doing.”

Himself and the team will travel to play Cork City, which could be the last long road trip for over two months, depending on the upcoming FAI Cup draw. The following three away games are all in Dublin and Doyle is confident of coming back up the road this week with three important points in the bag.

“We didn’t get our luck the past while but it seems to be falling for us now. We’re just going to focus on going down to Cork and getting a win there, keep the form going and see were we end up. Hopefully we’ll get promoted back to where we belong.” 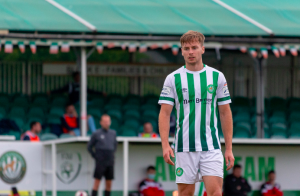 Asked about new signings Sam Verdon and Daniel Jones, Joe expressed that the squad could do with a couple of extra bodies.

“It’s great to get a couple of lads in,” he said. “It’s kind of obvious that the squad is a bit light. When we get injuries we struggle a bit but Gaz (Cronin) is getting the players who he wants in and we’re only going to get better.”

You’ll be able to catch the game away to Cork City, as always, on LOITV.IE for just €5.