A goal just before half time saw Bray claim their first Group A victory this season’s U19 EA Sports National Underage League.

The Green and White’s almost took a 21st minute lead. Josh McGlone intercepted and saw his shot deflected just wide. He took a short corner to Jack Curran who broke in from the left touchline to drill in a cross which Darragh Lynch flicked across the face of goal. The hosts lost both Ben Houton and Jack Curran to injury in the opening period. But Wanderers broke the deadlock in the 36th minute. From goalkeeper Ben Clark’s long punt, McGlone controlled. He laid the ball off to Hayden Roche before taking the return through pass and firing low into the far-left corner of the net from just inside the right of the penalty area.

The Slaneysiders had a chance just before the break. But Clark pushed Evan Farrell’s effort around the upright. Substitute Cillian Melwani almost added to the home tally on 57. But after beating the offside, he was thwarted by away custodian Alex Moody.  At the other end, Clark parried from Farrell’s shot with Aaron Roche’s follow up being blocked. Moments later at the other end in a counter attack, Sean McLean blasted high and over. With a quarter of an hour to go, Lynch got through but angle his shot across goal. 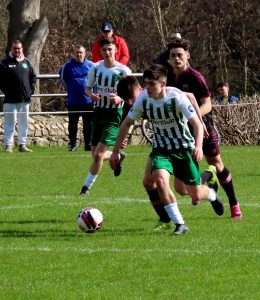 Bray retain home advantage on Sunday next (April 10) next when hosting Treaty United at Ballycorus. Kick-off is set provisionally for 2.30pm. 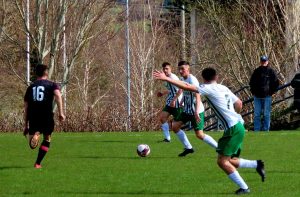 Under 15s defeated by RoversBig win for under 17s